NIP at the Beach

I knew I'd want a NIP picture at Coronado Beach today (Bellybean was too distracted to nurse at the Cabrillo Tidepools), but I was concerned about nursing in a bathing suit.  I'm adjusting to the idea of not covering like it's part of my religion, but nursing top down is still something that's awkward-feeling for me unless I'm wearing him in the Ergo.

As it turns out, I was even concerned about just plain being in a bathing suit, too.  I thought I was alright.  I don't love my suit anymore, since I weigh more than I did when Adam got it for me for Magoo's swim lessons when he was around one year old.  And the suit, at seven years old, has seen better days, the elastic in particular.  But I tried it on and figured I'd get by.  I thought I might prefer to head straight for deeper water, but I didn't expect to decide I'd rather keep on my skirt and T-shirt in the ocean than bare anything more than my calves (which was a bit weird as it was, since I hate to shave so I rarely wear shorts).

That should have made nursing at the beach much easier.  If it weren't for the sand.  My poor baby kept trying to latch, but there was a little sand on my nipple that I just couldn't seem to get rid of.  He'd start to latch on, and then he'd pull off looking disconcerted, until he finally gave up and just played in the sand.

By the time we showered off and changed to go home, he was very excited to get to nurse, so he didn't waste any time or milk on being distracted, even when his brother Sweet Pea wanted in on the photo op. 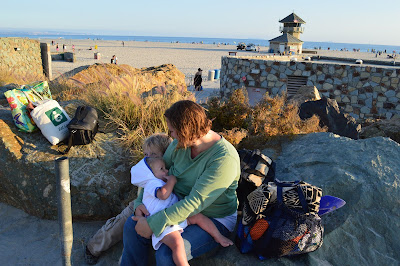