When my baby, Bellybean, my four-year-old, Sweet Pea, and I first started visiting legislators about two breastfeeding bills during the regular 83rd session, Sweet Pea had filled a sheet of paper with Dora stickers on the car ride to the Capitol.  While we went office to office, he wanted to share his stickers with the staffers.  He'd carefully peel off one sticker at a time and pass them out to each staffer, saying sweetly every time with practiced enunciation, "Do you want a sticker?"  I really can't convey how precious that enunciation was.  To meet him, you might not know that he was diagnosed at two with a severe speech disorder.  He still needs speech therapy.  It's hard to understand him when he's upset, or talking fast, but he gets by.  He articulates as best he can, and is pretty well spoken.  But I treasure that I can still hear in my mind the slow cadence in his high-pitched little-boy voice as he perfected that question: "Do you want a sticker?"  He charmed the crap out of people.

And he was delighted to make people happy.

The second day that we returned to the Capitol, the Dora stickers had all been distributed.  A friend had ordered "Thank You for Breastfeeding" license to breastfeed cards from WIC for me, and with them, a roll of stickers. 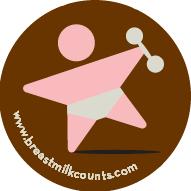 And I would grin a big Cheshire grin, adoring my little activist.

Today Sweet Pea noticed the stickers, which had fallen out of the box they were in.  We were on our way out the door to the post office to mail birthday cards to Magoo's teacher.  Sweet Pea wanted to be Sticker Boy on our errand.  I said no, as I am sometimes wont to while trying to herd three kids out the door, and he began to cry.  Realizing how much it mattered to him, I changed course, and I am thankful that I did.  He calmed down, and I was so impressed as he told me that he would tell people, "If you have a baby and it cries, you have to breastfeed it."

You might worry that people would react badly - much the way we worry someone would react badly to nursing in public.  But all I saw - all I've seen on the many days that Sticker Boy has spread his joy - is smiles.  Some of the chuckles may be ever-so-slightly embarrassed, but the rudest thing anyone has ever done has just been to decline a sticker in their haste - and even that is a rarity.  Often, in fact, people read the web address under the little pink baby and affirm the importance of breastfeeding.

At the post office Sweet Pea offered a sticker to the postal worker, and said (because it's all he really knows), "If you have a baby, you have to breastfeed it."  And she said, "Oh, I know all about that.  I breastfed my daughter 'til she was four!"
Posted by Krisdee at 6:58 PM