Shopping for Bellybean's birthday at Whole Earth Provision Co., I came across this novelty item: 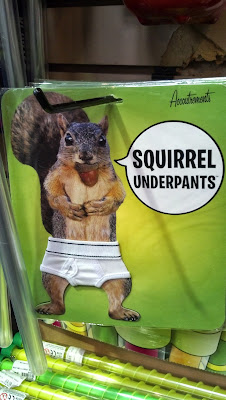 Just a silly, funny little wee pair of underwear.  Amused, I read the back: 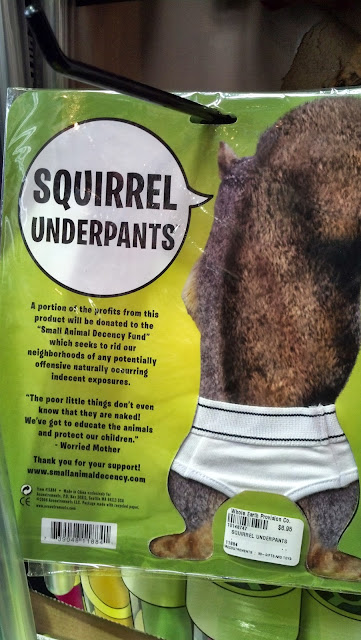 A portion of the proceeds from this
product will be donated to the
"Small Animal Decency Fund"
which seeks to rid our
neighborhoods of any potentially
offensive naturally occurring
indecent exposures.

"The poor little things don't even
know that they are naked!
We've got to educate the animals
and protect our children!"
- Worried Mother

Do I even have to explain what this has to do with nursing in public?

Well, probably, yes, because the connection may not be too obvious if you don't live in my head.  So, briefly:

...blah, blah, blah NIP is no more indecent than a naked squirrel blah blah....  blah blah worrying about exposing kids to NIP is about as ridiculous as putting squirrels in underwear blah...

You get the picture, right?

Of course, I don't want to offend anyone who worries about their kids seeing breastfeeding.  I get that it's outside of your comfort zone.  It's likely outside of what you consider to be a societal norm.

Thing is, unless kids are exposed to the reality that breastfeeding is the healthy, biological norm, breastfeeding will never be a societal norm.  Not only that, but without knowing it before they're old enough to catch on that breasts are sexualized, how weird will it be to then have to adjust to the notion that primarily, they're for feeding babies?

So.  In the interest of public health, we must all support mamas who nurse their babies - even in public, even where children may see.  And in the interest of the mental health of squirrels, we must let them go commando.  The world doesn't need another "Super Squirrel" like the one that terrorized my alma mater ages ago.

America's Biggest Problem?
Not NIP!
Posted by Krisdee at 8:36 PM