Happy Anniversary to Me! An Update on Austin ISD

A year ago today I had one of the crummier experiences of my life.

In the lobby of my sons' school while waiting for my middle child, I nursed my baby to sleep.  I was told to move to a private room, as though what I was doing was something shameful to be hidden away.

I was hurt, deeply.  And I was furious.

And now, I am grateful.


I went home that day fighting tears and I immediately sought support from Facebook friends.  I was overwhelmed by the response.

I started a letter that night of which I am proud.  It is informative, diplomatic, and firm.  It set the tone for all of the advocacy that I have done since that day.

And (tooting my own horn here which is a little uncomfortable for me, but) I have done a lot.  I've heard from mothers who say that they have been inspired to nurse in public by my blog or Facebook page, and that means the world to me.  Hays CISD has a new breastfeeding policy that I got to influence.  I got to be a part of breastfeeding legislation that, while it did not become law, laid the groundwork for passing pro-breastfeeding bills in the future.  And finally, fiiiiiiiiiiiinnaaalllllllyyyyyyy, Austin Independent School District has a breastfeeding regulation that is in accordance with Texas law!

I have by no means achieved anything on my own.  The number of people who have played a part in these accomplishments is tremendous.  2,049 people signed the petition asking AISD to adopt a policy that upholds the law.  More than 1,600 people have liked my Facebook page.  My letter has been viewed 9,961 times and my blog has over 42,000 views.  I have no idea how many people wrote and called the school district or their legislators, but I know that AISD administration took note, and that staffers I talked to at the Capitol knew what bills I was talking about, often just by their numbers.  An impressive number of people have spoken at school board meetings and testified at a House committee hearing.  SO many mamas gathered information and drafted sample letters to make contacting the lege easier.  Every person at the Education Austin (teachers union) board meeting I attended was in support of breastfeeding mothers.  Not one vote opposed the final recommendation of the Student Health Advisory Council (SHAC) supporting a policy that reflects the law.  Some of the AISD board members supported our efforts.  And my family has given so very much support, too, and made many sacrifices (like never having a clean house).

Both in the work with school districts and with legislation, many, many people have contributed to our successes.

You made an impact.

For the teacher who saw me nurturing my infant and complained, that day one year ago was just a butterfly flapping its wings.

But it could have damaged my breastfeeding relationship, had circumstances been different.  Thankfully, being confident in my right and in the importance of breastfeeding, being very experienced as a breastfeeding mother, the impact of that moment has been positive.  And this has been one heck of a hurricane!

It has been thrilling, and exhausting.  I write at slothspeed, so it's been awhile since I posted much of an update about AISD.  And now I have so much to share!  So this is a long post because it is long overdue.

In May I spoke at another board meeting. In June I went to a board policy meeting.  That night, I got to post this: 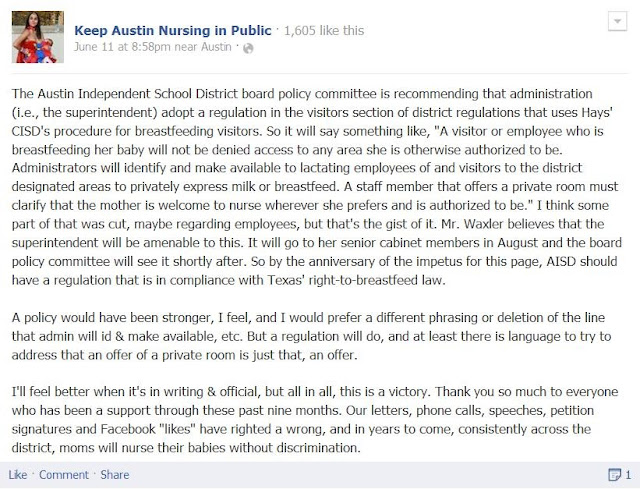 It was a very happy night, despite my concern that it was not yet official.


My reservations were well-founded.  Sort of.

There is now a regulation!  Sort of.

I received this via the grape vine:

I cannot find it online, so I assume either it awaits a webmaster or TASB approval.

What I don't love about the wording is that it retains language from the right-to-pump law that the district confused with the nursing-in-public law months ago when they had an abysmal regulation that was rescinded in December.  I feel like either they're thumbing their noses at me (we can write a law-abiding reg and still imply that y'all should be locked away - nana-nana-boo-boo!) or the editing of that rescinded policy was intensely lazy:


Rescinded Reg:The District shall provide a parent or visitor who has properly
checked in at a campus during the school day, a place, other
than a bathroom, that is shielded from view and free from in-
trusion by students, employees, and the public, which shall be
used to breastfeed or express milk.
The principal or designee shall direct the parent or visitor to
the place designated by the principal for breastfeeding or ex-
pressing milk.

New Reg:
A visitor who is breastfeeding her baby will not be denied ac-
cess to any area she is otherwise authorized to be. Adminis-
trators will identify and make available a designated area,
other than a bathroom, that is shielded from view and free
from intrusion by students, employees, and the public, which
shall be available to breastfeed or express milk. A staff mem-
ber that offers a private room must clarify that the mother is
welcome to breastfeed wherever she prefers and is author-
ized to be.

I suppose it seems like I'm being nitpicky, and maybe I am a bit.  I'm sort of joking, too.  Sort if.  I know a lot of AISD peeps put a lot of time into this issue (which could have been avoided if the right thing had been done from the get-go...).

Nitpicky, maybe - BUT, the reg has already been misinterpreted.

I know some women - and some babies - would prefer a quiet, out of the way spot to nurse.  I support that, of course.  But I want a regulation or policy that respects a woman's right, not one that tries to circumvent it.

I am so tired.  So, so, so, so, so so so so tired.  I want to look at this and say, "Well, okay, it's far from perfect, but at least it reiterates to administrators that a private room must be identified for pumping employees, which is awesome."  And that fact is awesome.

But I can't just ignore that the reg as written can be interpreted as saying that breastfeeding mothers must be hunted down and politely offered a private room where they can lock themselves away to nourish their babies.

So.  Next steps in this project-that-just-will-not-end:

I will email administration to let them know how the regulation has been interpreted, and to offer for Central Texas Healthy Mothers, Healthy Babies Coalition to present a training on the importance of breastfeeding and of community support as Mr. Waxler once discussed with one of our members.  Because hopefully the misinterpretation was just because of the language.  If principals have already had training and that's where this interpretation comes from, then I am at a loss.  I would feel so defeated and disappointed that I'd want to crawl into a hole and sleep there for a week.

But not today.  Today is my anniversary.  And I want some gluten-free, egg-free cake to celebrate!
Posted by Krisdee at 7:23 PM