I've been meaning to have a logo contest for my blog for like two years.  Well, maybe a little less, cause it's not two years old yet, but for a really long time, y'all.  Seems like National Breastfeeding Month is as good a reason as any to quit procrastinating.

Once, in college, I had to do a project for an art class that was required for my design/tech theatre degree.  I had this large framed mirror that was cracked - I don't remember if it cracked around the time of the project or I risked seven years bad luck for the sake of a grade or what, but I used the mirror and a sloppy mess of pink ribbon and I think I splattered it with black paint.  It was supposed to be about my mother's breast cancer.  It looked like crap.  I seem to recall tossing it in a dumpster once it was graded and returned to me.  I have blocked any memory of what grade I received.

I'm not an artist.  BUT, I think it would rock like Slayer to have a logo for my blog.  I love the Wonder Woman photo I use on FB, and I'm super appreciative that my husband Adam (a brilliant copywriter/marketing consultant/pianist/songwriter, and also NOT - notnotnotnotnot - a graphic artist) made the cover photo I have on Facebook.  The blue and red work for Wonder Woman, but with text, it makes my eyes hurt.  Seriously.  I worry it could give someone a seizure. 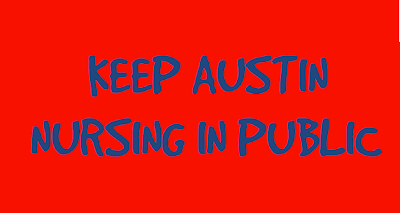 I have just about zero guidance on how it should look.  I'd like to have a new profile pic and cover photo, something that works together.  But if it's just a logo, not like a whole concept-ey kind of a thing, that's cool, too.  Whatever.  I'm not picky.

Oh - I called the blog Keep Austin Nursing in Public after the Keep Austin Weird campaign that's about supporting local businesses.  The slogan is repurposed a lot around here.  The font Adam used mimics the one used for the bumper stickers and T-shirts around town, and I like that.  But I do want my advocacy work to reach outside of the ATX, and to expand my audience.  Just FYI.  So maybe no, like, Austin skyline, ya know?

And while mostly I blog about breastfeeding advocacy, I also post about feminism in general, body image, gender stereotyping, parenthood, etc.  But mostly boobs.

Entry constitutes permission to use your name and logo in the future, without additional compensation.  Any submissions are made with the understanding that I have permission to use, edit, etc. (not edit as in mess with your art, but, for example, with our breastfeeding coalition the name is part of the logo and I've needed to remove that for some projects.)  I don't know if that makes them my property or just that you're giving the A-OK to use them.  I can't afford a graphic designer let alone a lawyer to make this sound all official; if you have questions please ask so we're on the same page.  If you submit a logo and I use it, it may well end up on T-shirts, and even if I make a little dough selling those, you'll just be stuck with your one shirt.  Oh, yeah - if you win, I'll make you a shirt!  (That's the aforementioned compensation, but just for the person whose logo I use.)

Submissions are due no later than 11:57 pm on September 4th to KeepAustinNIP@gmail.com, with "LOGO" in the subject.  It should be a high res image that I can use on your shirt.  It would be great to get it as a Jpeg, & also in an EPS format (I don't know what that is, but I know it's been preferable for our coalition shirts in the past).

Be sure to subscribe to this blog in case there are updates.  I feel certain I'm forgetting something...

If all goes well I'll share the chosen logo on September 5th - the anniversary of the incident that started this whole advocacy thing for me.  Cause I want to celebrate the Lemonade with a new logo!
Posted by Krisdee at 7:47 PM No comments: