Representative Riddle on Tuesday afternoon announced that House Bill 1706 does not have her support, remarking, while she was at it, that breastfeeding mothers need to be modest.  Instantly, breastfeeding advocates jumped in to comment, sometimes with gentle education and other times with "snarky" (according to the media) insults.

This is my bill.  Not really, it's Rep. Farrar's, but I am so invested in this bill.  I've been working to support our breastfeeding bills for weeks, to the point of exhaustion and dehydration, to the extreme detriment of my already messy home, and sometimes to the annoyance of my slightly neglected kids.  I skipped driving to the pharmacy to refill my Synthroid prescription for a whole week after running out because I was too busy working toward making this bill law.

You can think I'm stupid or nuts for this, or, you can try to understand the magnitude of HB 1706 for nursing mothers.

I'm not alone in this work.  Many women in and out of Texas have made sacrifices to spend countless hours gathering and sharing information.  We are striving to communicate the need for this bill to the representatives who will decide whether or not it continues through the legislative process.  (Rep. Riddle, by the way, is not among those representatives - as in, she's not even on the committee.)

This is my bill, our bill.  It belongs to the breastfeeding mothers of Texas, their babies, and their advocates.    And with intelligence, education, and diplomacy, we can help make it law.

I understand the frustration felt by the women who engage the opponents of the bill and make "snarky" comments.  I get that it can be hard to make your irritation (or fury, depending on how many comments you've read) take a back seat as you craft a well thought out, respectful, educational reply (and then proofread it).

But if the focus of all this media attention is put on flippant remarks, we stand to lose this bill, and it will be two years before we have another shot at it. So please, when commenting on Rep. Farrar's post or the media coverage of it, remember who you are representing.

With every comment you make, you represent mothers who may not breastfeed for as long or at all if this bill is not made law.  You represent babies who stand to have less incidence of obesity, Type 2 Diabetes, allergies, asthma, ear infections, celiac disease, sudden infant death syndrome (SIDS) - and the list goes on and on and on.  You speak as a representative of mothers who will have lower rates of breast cancer and ovarian cancer.  And postpartum depression - not just from breastfeeding but because they aren't holed up at home alone because they're too afraid to breastfeed in public.
(See research citations below.)

Please, for the love of breastmilk and babies, show the world that breastfeeding advocates are on the smart side of this issue.  If you're yelling and demeaning people, they're not going to listen to you.  You're a mom.  You see it with your kids, right?  Adults are no different.  Criticize them and they'll ignore you.

Over here on the smart side of this issue, you and I know that moms are not likely to have the time and money (I was told 10 grand) to sue a business.  (And those of us who have had NIP incidents know that attorneys aren't calling at all hours offering to work pro bono.  Not even the ACLU called me back.)  Furthermore, it would be very hard to prove damages, so you might even be hard pressed to get a lawyer to take the case if you were paying him/her.

One vital aspect of this bill is that it gives the Comptroller's office the responsibility of communicating to business owners that there is a law protecting a mother's right to breastfeed.  This may really be more powerful than the enforcement provision which will protect our right.

A business owner reading an email from the Comptroller is going to think two things: "Oh - there's a law that says mothers can breastfeed in my place of public accommodation.  I did not know that."  And, "Oh, they really mean it with this law.  I can't just revoke that mom's authority to be in my establishment, they could potentially sue me if I do."  And maybe one more - "Well, gee whiz, that sure makes it easier to handle complaints.  I don't have to try to please one person by possibly humiliating another.  I can just tell anyone who complains that I'm following the law, and I could be sued if I don't."

So the problem of 40% of women being so worried about nursing in public that it's their top barrier to breastfeeding can be greatly impacted by knowing that business owners are telling their employees they have a right to nurse anywhere.  The problem is addressed through the education on the law, so NIP incidents plummet and lawsuits would be rare, not rampant.

People are going to spout off about law suits, the role of government, and modesty, but this is about NONE of those, so don't get sucked in.

This is a bi-partisan, public health issue.

The current law we are seeking to strengthen, Health and Safety Code 165.002,  was voted into law almost unanimously.  Authored by Democrat Debra Danburg after a friend was ousted from a restaurant for breastfeeding, it was passed through the House and Senate and was signed into law in 1995 by then-governor President George W. Bush.

It's a good law.  We love the law.   The thing is, a law which can be ignored with impunity weakens respect for the rule of law.  A brilliant woman told me that.

This good law, and the mothers and babies it seeks to protect, deserve respect.

Trolls on the internet and even Rep. Riddle don't really matter.   At this moment, HB 1706 is pending in the Business and Industry Committee.  If you're a Texan and you have five minutes, don't spend it commenting on Rep. Riddle.  If this issue matters to you, send an email to the representatives who matter to it.  Because the most important thing about Riddle's stance right now is that it is irrelevant if we don't make it out of committee. 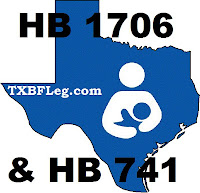 If you're not a Texan, please share our advocacy efforts outlined at TXBFLeg.com where there is information about our letter-writing campaign and our call for NIP incidents (which prove the necessity of this bill).

If you're on Facebook, share this group, and the graphic below.  And you can make the badge to the left your profile picture by scaling it to fit. 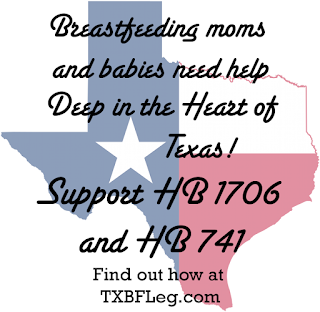 IF you comment on Rep. Riddle's post or on media coverage and you're a Texan, please begin your comment by saying so - and if you're in Rep. Riddle's district, 150, include that.  Click to look up your representative or check her district map.

PLEASE do not engage the trolls/opponents. They often make themselves look ignorant without any help from us, and when we start arguing, we're likely to get frustrated and become less diplomatic.

In fact, not reading the other comments can be a really good idea.

PLEASE be respectful of Representative Riddle. Here are some helpful guidelines.

You may feel you have been disrespected, and that makes it difficult to be diplomatic.  It also makes it hard to hear the other person.  And these comments should be about being heard, not just talking.  So make sure your voice is heard, and that you can be proud of how you represent other breastfeeding moms.  Please.

For this little guy, and so many more.

asthma
Breastfed babies have lower risk for developing recurrent wheezing when they are older (age 6 or more). Archives of Pediatric and Adolescent Med., July 1995),

celiac disease
Akobeng, et al.: Effect of breastfeeding on risk of celiac disease: A systematic review and meta-analysis of
observational studies. Archives of Disease in Children 2005.

Research on Fear of NIP as Barrier to Breastfeeding:

"The variability in support for breastfeeding by managers of restaurants and shopping centers will continue to create uncertainty for mothers wishing to breastfeed in these public places."
McIntyre E, Turnbull D, Hiller J: Breastfeeding in public places, Journal of Human Lactation 1999; 15(2):131-135.

American Academy of Pediatrics: “Lack of family and broad societal support is an obstacle to breastfeeding.”  Policy statement: Breastfeeding and the use of human milk, Pediatrics February 2005; 115(2):496-506.

Email ThisBlogThis!Share to TwitterShare to FacebookShare to Pinterest
Labels: Legislation