UPDATE 3/23/13: You can see video of my speech and the post-communication discussion of suspending policy work by clicking here.  I have been informed that the board policy committee will not meet until June 11 (instead of next week) because they are all very busy working on the Bond election.


Tonight I spoke at yet another board meeting.  I wasn't sure what I haven't already said, but I didn't want to waste an opportunity to try to get through to whomever may still disagree with my perspective.  Below is my speech.  I'll edit this post tomorrow to add the video when Adam has finished it.  You see, he had it about ready to go when Citizen Communication concluded and the board discussed suspending work on a board policy until we know the fate of HB 1706.  Ugh.  Spring break ended yesterday and already I can't wait for summer, when all of this will be done.  Or so I thought.

Below my speech is my letter to the board, in response to the Chairman's interest in knowing more about the legislation.

Good evening.  In less than two weeks the board policy committee will meet and breastfeeding will be on the agenda.  I don’t know the procedure beyond that, and I wanted to talk to you again before a decision’s made.

Two months ago when I was here, my baby was falling asleep in his father’s arms, but every two minutes a speech would end and the applause would wake him.  I nursed him to sleep, just before my turn.  So I was breastfeeding here at the podium.  It wasn’t a stunt - just a necessity.

Last month, he couldn’t fall asleep.  I bounced him, he cooed.  He was a distraction.  He was disruptive.

When I was breastfeeding him, that was not disruptive.

Breastfeeding is not a tequila bottle or a curse word on a T-shirt.  Limiting distractions and disruptions that could be caused by fashion makes sense in a dress code, but there is no place for it in language regarding breastfeeding.

If my child required a service animal (even a miniature horse) there’s no provision in the applicable policy that states, “If your dog’s really cute and the kids all want to pet him, you’ll have to be secluded away.”

There’s already a federal law which grants schools the right to tell a parent they have to leave if they’re disrupting the environment, but there’s no redundant language to reflect this in the service animals policy.

If I were Korean, black, a Baptist, blind, or in my eighties, no one would say to me, “It’s okay for you to be 83, as long as your being 83 does not disrupt the teaching and learning environment.”  Or, “You can be blind, but if it distracts anyone, you’ll have to go be blind in a private room."

Breastfeeding mothers are not a protected class.  But neither are parents with nose rings, or tattoos, or those who smell strongly of cigarette smoke.  But no one’s telling those parents that if those things draw attention, they’ll be segregated.

And if someone did, while disconcerting and inappropriate, it wouldn't pose a risk to public health.  I can’t emphasize this enough: when breastfeeding is stigmatized as something which may be disruptive or distracting, rather than treated as normal and healthy, we take a great risk, for which our children will suffer. 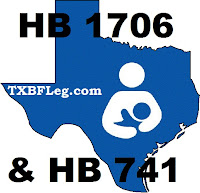 Hello, and thank you for the opportunity to speak to you again tonight about the importance of supporting breastfeeding mothers.  I rushed out to get my baby home and to bed even though he is all mixed up by the time change, and once home I learned of the conversation the board had regarding current legislation related to breastfeeding.

HB 1706 will strengthen Texas' existing right-to-breastfeed law.  You can read the bill and subscribe to updates at this link: http://www.legis.state.tx.us/BillLookup/History.aspx?LegSess=83R&Bill=HB1706

Texas Health & Safety Code Sec.165.002 currently reads "A mother is entitled to breast-feed her baby in any location in which the mother is authorized to be."

It is a terrific law which asserts a mother's right and comforts many women who are nervous about breastfeeding in public.

However, there is no provision which actually protects the right.  While Austin ISD is working on whether and how other laws pertaining to students and parents must be taken into consideration when interpreting how to implement 165.002, places like Hollister Co. and Pure Fitness for Women are simply ignoring the law altogether.

HB 1706 strengthens the language of the law by adding the word "otherwise" before "authorized to be" and stipulates that a mother cannot have her authority to be in a place revoked for breastfeeding, and that no one may interfere with or restrict her right.

In my opinion, the most important and potentially effective aspect of the bill is that it will notify businesses of the law via the Comptroller's office.  It is usually an ill-informed employee who insists a nursing mother must move or altogether leave a place of public accommodation.  If more business owners were aware of the law and trained their employees accordingly, fewer women would face discrimination.

A similar bill has failed in the past few legislative sessions; in the past the proposed enforcement provision was a fine.  But a fine would require creating a system to assess fines, which would create a need to finance that system.

A private cause of action is not accessible to very many women; it would not result in rampant lawsuits.  Most families cannot afford a lawyer and do not have time for a lawsuit.  It would be difficult to prove damages, or even to get a lawyer to take the case.

It would however stand to remind businesses that the right has weight.

The language in the initial version of HB 1706 broadly defines an "interested person;" this language will be narrowed in response to concern voiced by the representative of NFIB, the only organization which testified against the bill.  There was significant support for the bill represented by individual stakeholders and health organizations.

You can imagine how invested I personally am in this bill.  You see how motivated I have been to protect mothers and babies in our part of Texas.  I want very much to improve our law for all of Texas.

However, I see it as entirely unrelated to the policy at AISD.

Regardless of the outcome of this bill, the law exists for a reason.  With or without an enforcement provision, the law should be respected.

I ask that you continue with the policy work that you have begun and fully support breastfeeding regardless of the outcome of HB 1706.

If I may be of any assistance, please feel free to contact me via email or at the number below.  I hope that this information is helpful to you in determining how to proceed.


Postscript: On my way out, a man in the lobby who had just watched my speech on the TV screen there thanked me. That means more to me than he can possibly know.  Isn't it incredible the effect we can have on people, both positive and negative, without ever realizing our impact?
Posted by Krisdee at 9:35 PM