Today we were at the San Diego Zoo, and when Bellybean needed to nurse I asked Adam to take some photos for my Photo Challenge.  I'm posting a breastfeeding picture each day of National Breastfeeding Month on Facebook.  The challenge is mostly just to remember to do it, and the point is to normalize nursing in public.

Today's pictures aren't fantastic, which is too bad, because I am psyched about a snazzy new camera we got.  But what occurred to me as I clicked through them - besides that my baby has gotten so big! - is that, depending on what angle Adam was taking them from, you couldn't even tell that I was breastfeeding.

I wasn't careful to cover.  To be honest, I had to zoom in to make sure Bellybean hadn't unlatched in the first photo, because I didn't want to break Facebook's "actively nursing" rule for bf photos. 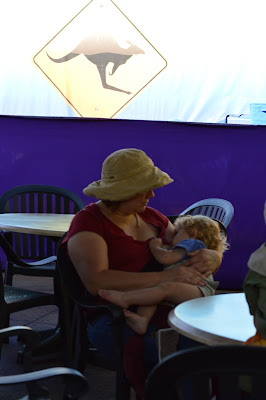 Even so, as Adam sort of circled me, trying different angles, it looks as though I could just be holding a sleeping baby. 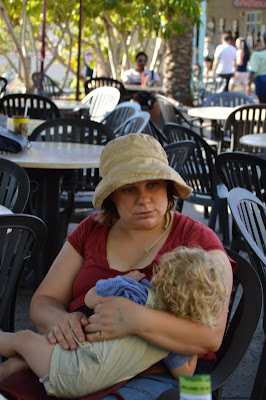 And it occurred to me that this illustrates that so often, people are unaware that a baby is being breastfed. 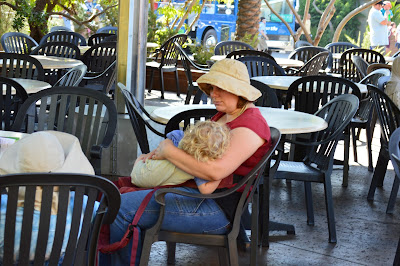 Of course, sometimes it feels like all eyes are on us as we nurse our babies.  Like every person in a one-mile radius is staring at your breasts and even judging you for using them as designed. 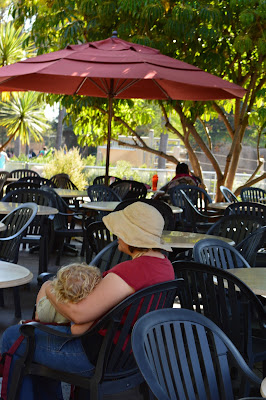 If you feel that way, look at the photo just above.

Most people aren't near enough to notice or at an angle to ogle.  Most people, in fact, are too caught up in what they're doing to be aware of public breastfeeding.  Even when it's obvious, they may well be oblivious.

And if maybe they're not?

Then you can be.

I like to breastfeed in a bubble.  I may have gotten dirty looks for NIP before, but I wouldn't know it.  I'm not looking around to check.  I'm talking to my kids or my husband or staring adoringly at my baby - or my smart phone - and I'm just not aware of other people.

Even if I hear a little chuckle.

Tonight on the elevator Bellybean was nursing (top down) in the Ergo when he became distracted.  My fingers flew to my nipple, covering it and then yanking my clothes over my breast.  And the man next to me chuckled.  I think.  I don't know if he saw.  Or if he was amused in a creepy-guy way that he saw a bit o' boob, or that I rushed to cover in what I'm sure was an amusing little scene, or that my cutie pie was so distracted.  Or maybe he wasn't amused at all, or not over me.  For all I know he was looking at a funny text message, or maybe Adam was picking his nose and he saw.  I don't know.  I didn't want to know.  I guess I was a tad embarrassed, but at the same time, I didn't care.  Him maybe seeing a flash of skin, him maybe thinking that was funny - it doesn't matter to my life.  The opinion of some stranger on an elevator isn't nearly as important as the fact that I ate a(n undisclosed) number of mini Reese's cups tonight even though I want to eat healthier.  It doesn't matter as much as my kids getting to bed very late tonight, or my computer being on the fritz, or that I'll be exhausted when the boys wake up at 6am CST even though I'm still up after 1am Texas time.  In fact, there's such a gap between how much those things matter compared to the minute amount of embarrassment I felt at being exposed for a second that I can honestly say that it just didn't matter at all.

So why yammer on about it for a long paragraph?

The bubble.  I stayed in my bubble.  I could have peeked over to see if he saw.  But why bother?  What good would it do me to know?  I was feeding my baby, and that was all that really mattered.

My suggestion, if you're NIP nervous, is to try being unaware of the people around you when you breastfeed.  After all, they are likely unaware of you.
Posted by Krisdee at 11:37 PM