Take Me Out to the Ball Game TONIGHT: The Round Rock Express Rocks for Nursing Mamas & Babies!

When my oldest son, now eight, was almost a year old, I read in a parenting listserv I was on about a mother who was nursing her baby at a Round Rock Express game when she was asked by an unwitting employee to go to a private room to nurse her baby.

Now this was in 2006, before Facebook was even open to the general public.  But even without the tremendous asset that is the Facebook breastfeeding advocates community, mothers rallied to the cause.  Letters flooded management, peppered with the words "boycott" and "nurse in."

The Round Rock Express' president, Dave Fendrick, who was the general manager in 2006, could have doubled down.  It happens a lot, even when people are made aware of the law.  For quite some time my school district gave that method a go.  Hollister completely ignored the public outcry of mothers in December.  And last week - during World Breastfeeding Week - the city of Burleson, Texas' mayor defended a city employee who harasssed a mother for feeding her 16-day-old baby.

But Mr. Fendrick showed more respect for the law, and for nursing mothers.  Within days the issue was resolved.  An apology was promptly issued:


We learned a valuable lesson over the past couple of days and we have now established a policy for breast feeding mothers....  We apologize for any inconvenience we caused anyone regarding this situation and look forward to having families in the Central Texas area enjoying Round Rock Express games this season.

Not only that, a breastfeeding policy was posted to the Fan Guide section of the Express' website: 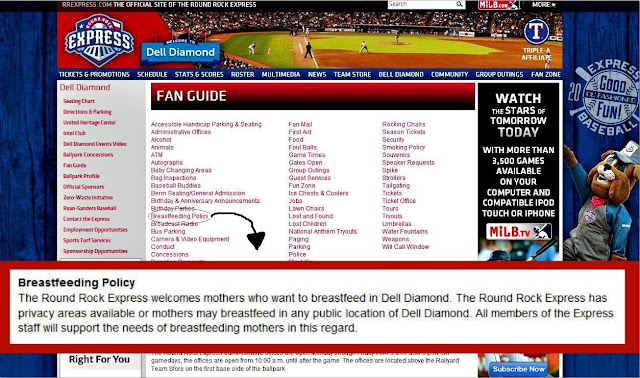 According to the Austin Chronicle, Fendrick said that

If someone is offended by the sight of a mother nursing her child, "we will offer them the opportunity to relocate," Fendrick claimed. And if they don't want to relocate? "They're just gonna have to turn their head and not watch," he declares. "We're not asking the mom to move."

Seven years later, not only can mothers feel certain they are welcome to breastfeed at the ball game, the Round Rock Express is also supporting breastfeeding in another way.  Last week, the Mothers' Milk Bank at Austin was the featured non-profit at a game.  As I arrived late from our Breastfeeding Month Proclamation at Austin City Hall, I heard the announcer talking about babies born so small they could fit in the palm of your hand, and how vital donated breast milk can be to their survival.  They had interviewed the director earlier in the night, and there was a kiosk set up at the entrance where people could learn more.

Our local breastfeeding coalition, Central Texas Healthy Mothers, Healthy Babies Coalition, will occupy that kiosk tonight.  We'll be giving away free "Eat Local" T-shirts and tote bags while they last.  Three dollars from each discounted ticket purchased with our promo code will be donated to HMHB for our breastfeeding advocacy efforts.  And hot dogs and drinks are only $1.

Now, I'll admit that I'm not a sports fan.  Roller derby is cool (HMHB's president is Battlestar Gailactica!), but I haven't been interested in baseball since I stunk at it as a kid.  (The only time I made it home was when I was walked - once - and I once caught a ball thrown by the coach with my face.  I'm not a big baseball lover.)  That said, I've been to a couple of games this season and had a really great time.

My husband and my boys have really enjoyed watching the games.  They had pizza while I ate a salad (no gluten for me).  They enjoyed watching the goofy things people do when the cameras are on them and we can watch them smile or chicken dance on the big screen.  There's a playground we enjoyed the first time we went, and a pool we loved when attending a bloggers party.  There's also a Fun Zone that we didn't get to, but next time, we'll be rock wall climbing for sure.  I had no idea there were so many fun things to do at a ball game! 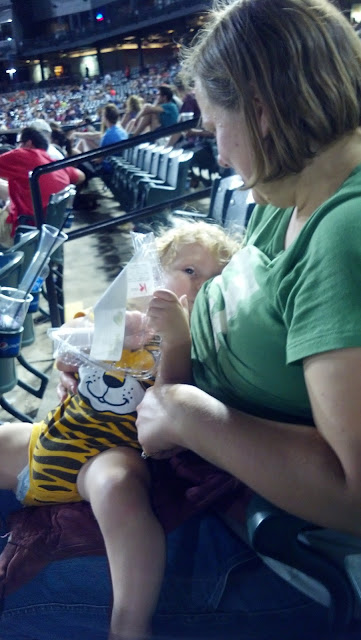