Marianne's Speech to the Board

This is the speech Marianne Baker gave to the board at the January 28th meeting.  Marianne has been such a vital part of the progress we have made so far.  She's a lawyer, and her knowledge is invaluable.  She is intelligent, savvy, tenacious, and full of grace.  I didn't get to see The Avengers, but Adam showed me a clip where Loki says, "I have an army."  And Tony Stark shoots back, "We have a hulk."

AISD is a huge district, with all the bureaucracy that comes with any large institution, and complete with a team of lawyers.  It could be daunting.  But it's not.

We have a Marianne.

Here is her speech:

We came and spoke to you in November about the problems with the new AISD regulation that required principals to send mothers to nurse their babies in a place out of public view.  Many thanks to Superintendent Carstarphen for listening and ultimately rescinding that regulation.  In particular, I commend Mel Waxler for his thoughtfulness and willingness to work with us on this issue.

While rescinding the old regulation is a positive step, principals are now affirmative guidance on this issue.  So, we ask you to continue your progress.  We ask that you put this issue on your agenda for next month and adopt a policy that complies with the plain language of the right to breastfeed law – a mother is entitled to breastfeed her baby in any location in which the mother is authorized to be.

When this law was considered in 1995, some legislators didn’t know why a positive statement was needed since women were free to breastfeed their babies; there was no law against it.

Then one legislator spoke up and said that only the week before, he and his wife had been at a restaurant, and the manager asked his wife to not breastfeed her baby there.  The right to breastfeed statute ultimately became law.

Sadly, 18 years later, it is clear that this positive guidance is still necessary.

A mother quietly feeding her baby is not disruptive and does not interfere with the teaching and learning that goes on in schools.  Someone might not like it, but someone’s dislike doesn’t turn a nursing mother into a disruption.

AISD needs mothers.  Mothers as volunteers, doing Friday folders, helping in the cafeteria; Mothers who participate in their children’s education, attending conferences and class presentations.  A mother can watch the class play or do the Friday folders while quietly nursing her baby.  She can’t participate if she has to leave the room.  If you adopt a policy that complies with the law, then moms and babies are protected and AISD wins, too.

We have provided you with suggested policy language.  We ask that you set this issue on next month's agenda and adopt a policy that supports mothers and babies and complies with the law. 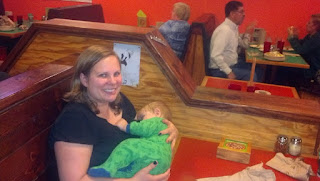